I am the sum of my experiences,

once I came to understand this, I was able to become the man I wanted to be. 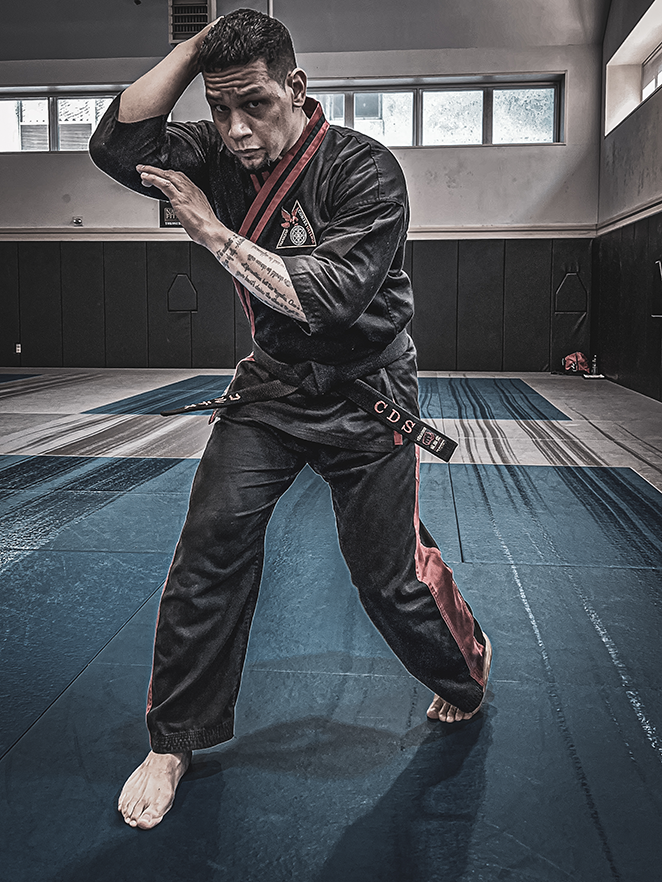 Jerime Cortés is the founder of the Cortés Defense System.  From the first karate lesson, his focus on martial arts has been self-defense.  As a child, he was bullied in school.  He lived in a neighborhood where fathers walking with their family to and from school were randomly attacked without provocation by teenagers who thought it was amusing, as a crowd of young students watched and cheered with excitement.  A neighborhood where a beautiful young girl had her life turned around and changed forever as she was walking back home at night after buying pizza for a family gathering and was ambushed, attacked, bitten, and left on the ground by a group of females.  In a neighborhood, where a man would run into a church asking for help any given night because he had just been stabbed in the throat at the bar next door.  These and other similar experiences fuel his hard work, persistence, and tireless pursuit of mastering the art of self-defense.

Though he has managed not to get directly involved with drugs and crime, he’s had a front-row seat through close family members and friends.  As a result, he is no stranger to violence and understands the impact and scars that it leaves behind.

He was born in San Juan, Puerto Rico, into a Christian, near-poor class family and was raised mainly by his mother, who remarried on multiple occasions.  His relationship with his step-fathers was amicable, but without the lack of tension and animosity at times.

His family moved around often.  As a result, by the age of 16, he had relocated residencies over 12 times.  He has lived in Puerto Rico, United States, for a short while in Australia, and currently lives in Japan.  Having moved around so often, he’s been exposed to different ways of living, cultures, sub-cultures, and walks of life.

Jerime has practiced martial arts for over 36 years and has been teaching it to students of all ages for the last 25 years. He’s had the opportunity to train with other martial artists worldwide, exposing him to different combat arts that have influenced his style.

Information Technology
We use cookies on our website to give you the most relevant experience by remembering your preferences and repeat visits. By clicking “Accept”, you consent to the use of ALL the cookies.
Cookie settingsACCEPT
Manage consent

This website uses cookies to improve your experience while you navigate through the website. Out of these, the cookies that are categorized as necessary are stored on your browser as they are essential for the working of basic functionalities of the website. We also use third-party cookies that help us analyze and understand how you use this website. These cookies will be stored in your browser only with your consent. You also have the option to opt-out of these cookies. But opting out of some of these cookies may affect your browsing experience.
Necessary Always Enabled
Necessary cookies are absolutely essential for the website to function properly. This category only includes cookies that ensures basic functionalities and security features of the website. These cookies do not store any personal information.
Non-necessary
Any cookies that may not be particularly necessary for the website to function and is used specifically to collect user personal data via analytics, ads, other embedded contents are termed as non-necessary cookies. It is mandatory to procure user consent prior to running these cookies on your website.
SAVE & ACCEPT